Footsteps don’t just play themselves – you have to define how and when to play them.

While all the hard work of finding the correct footstep effect, playing the audio clip and managing the prefab is taken care of without much for you to do, you still need to define how and when footsteps will be played.

The easiest way is to automatically play footsteps in regular intervals when a game object with a Footstepper component is moving.

This is set up on the Footstepper component – follow the link above for details.

This is the best way to perfectly time footsteps with your animations – either set them up in a Mecanim animation or the Animation window. 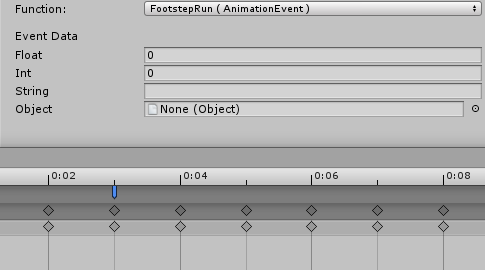 In both, you’ll have to define or select the Function that will be used. You can use the following functions to play different footsteps:

You might have noticed that footstep, walk, run and sprint functions also have an Index version. They’ll let you directly play a footstep for the defined index without checking the animation weighting.

A Footstep Trigger is a component that plays a footstep if a Footstep Source enters the game object’s trigger (i.e. a collider with Is Trigger enabled).

Select the Footstepper that will be used to play the footstep.

The Time Between can be used to prevent too many footsteps playing from the trigger.

Enabling Raycast Position will use the footstepper’s raycast to find the ground position (and normal) below the game object.

Enabling Limit Layers will only allow game objects from the defined layers to cause a footstep.

Please keep in mind that Unity requires a Rigidbody component to be involved for a collider/trigger to recognize something entering it.

If none of the available ways to play a footstep suits your needs, you can always use custom scripts – e.g. as part of your player controls.

Simply get the Footstepper component that should be used (e.g. adding it as a public field in your script) and you’re able to call the same functions used by animation events (for the footsteps, you’ll want to use the Index versions):

The functions require an int parameter to pass on the index of the foot that should be used (or -1 to not use a foot und just use the component’s game object).

The FootstepCustomIndex function also requires a string parameter to pass on the custom effect’s name.

Additionally, you can set the Footstepper‘s grounded state – this is only changed via scripting and allows you to prevent walk, run and sprint footsteps from playing.

Call the SetGrounded function, which requires a bool parameter. E.g. footstepper.SetGrounded(false) sets the footstepper to not be grounded.

In the demo, this is used by the 2D example while jumping.

When using Footstepper‘s classes or components in your code, make sure to include the GamingIsLove.Footsteps namespace at the top of your script file: